It’s July 16th, two weeks since the CT scan in the ED revealed the mass in my throat. Canadian medicine has rallied to my side. I have met with a throat surgeon, a radiation oncologist, and a medical oncologist. You know that you are in  trouble when you need to talk to three subspecialists. It’s time to decide about my course of treatment. This post is about how I — or, better, my wife and I — made this decision.

First, let’s celebrate that the system recognized that it was my choice to decide what treatment I should receive. It wasn’t always so. Nineteenth- and early 20th-century doctors were white males who believed they had the authority to determine how patients would be treated. But starting in the 1960s, bioethicists insisted that this style of practice was inconsistent with respect for patients’ autonomy. Lawyers argued that, for example, removing a cancerous breast while a woman was anesthetized was an assault. That patients have rights to consent and that medical decision-making should be a collaboration between doctors and patients was a revolution — incomplete and imperfect — but much to the benefit of patients.

What are the choices for treating my cancer? In essentials, they are a) surgery (hence, the throat surgeon), radiation (the radiation oncologist), and chemotherapy (the medical oncologist). I can have all or none of these therapies, so there are 8 options, as you see below. 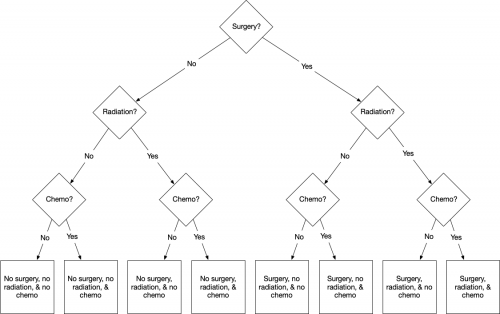 To my surprise, however, not even the throat surgeon thought that surgery was a good choice. Yes, it would get the carcinoma out of my throat, but so would a few grams of plastic explosive. A surgeon would have to excise significant portions of my throat and tongue. So if we take the ‘No’ branch, then the choices look like this. 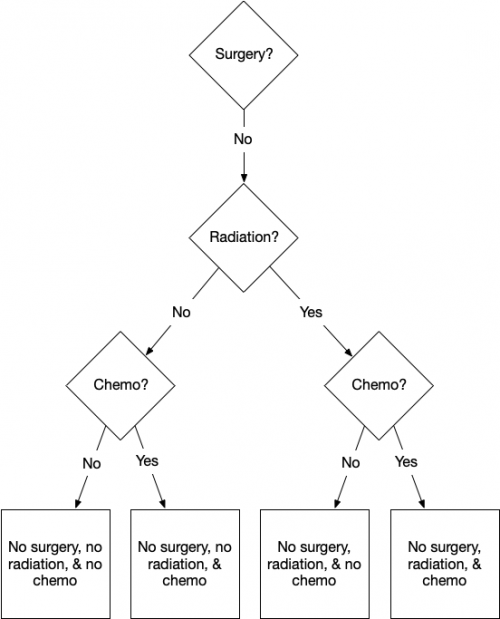 But the next choice is also easy. We must get the tumour out somehow, or it will kill me, and radiation will do that with less trauma than surgery. Radiation disrupts the functioning of the cellular nuclei, killing the cells. Because they are reproducing more quickly, cancerous cells have more active nuclei than healthy cells, and this makes them more vulnerable. This means that radiation is more likely to kill cancerous than healthy cells. So radiation can destroy the tumour while leaving the surrounding tissue injured but structurally intact.

The difficult choice is whether to have chemo.

This doesn’t mean that radiation is safe or comfortable. A standard part of the preparation for radiation is an exam from a dental surgeon. He explains that the treatment will kill my salivary glands, giving me a dry mouth. Saliva also prevents tooth decay. Therefore, to keep my teeth, I will have to practice an elaborate daily care routine for the rest of my life. Radiation will also weaken the bone in my jaw. So what? It beats certain death.

This leaves one more decision: should I have chemotherapy concurrently with my radiation treatment? Chemotherapy — in this case, a drug called cisplatin — is poison. However, it is more poisonous to cancerous cells than to healthy cells. As with radiation, the idea is to give you just enough to kill the cancer cells without killing too many of your healthy cells. Unlike radiation, however, chemotherapy will act throughout my body, not only on the mass in my throat.

But living longer isn’t the only thing I want. Radiation + chemo would be a more gruelling treatment than radiation alone. Worse, chemotherapy can cause permanent harmful side effects. The side effect I fear most is a chemotherapy-induced cognitive impairment (CICI, sometimes called ‘chemo brain’). There is emerging evidence that some (but not all) cancer survivors experience permanent deterioration of their abilities to remember things and solve problems. I am a researcher and writer, and being unable to continue my work would be a painful loss.

What’s the risk of CICI? Unfortunately, we don’t know because we have much less data on CICI than on cancer survival. For many reasons, cancer specialists have focused more on survival than long-term quality of life. My doctors say that they don’t see CICI in their patients, but is this because it doesn’t happen or because they did not follow-up with their patients to ask about it? My suspicion is that CICI is a bigger problem than most oncologists realize.

My preference, then, is to have radiation without concurrent chemotherapy. I’ll accept a small reduction in 5-year survival probability for a possible, but unquantifiable improvement in the chance that I will retain my mental acuity post-cancer treatment.

But am I thinking about this problem the right way? Medical decision making is always framed in terms of the interests and beliefs of an isolated patient. But I am more than just me. I have a spouse, and I’m a parent of 5 children (albeit now grown adults). Trading off a survival risk for a possibly better quality of life seems best to me, but one of my mantras is, “It’s not about you.”

Kathi and I talk about this at length. Her view is that if she had cancer, she’d do everything possible to be sure to be rid of it. “If it was in my body, I wouldn’t be able to think about anything else. But that’s not you at all.” She’s right. Even having seen the tumour, I think about it only when I get a twinge of pain in that region. It’s just another hassle, not something I’m anxious about. I ask, “If I don’t take the maximum treatment, won’t you constantly worry that it is still in me?” “You might think so, but I don’t think I will. And I know how much you would regret it if you could no longer write.” So, we’ll go with radiation only.