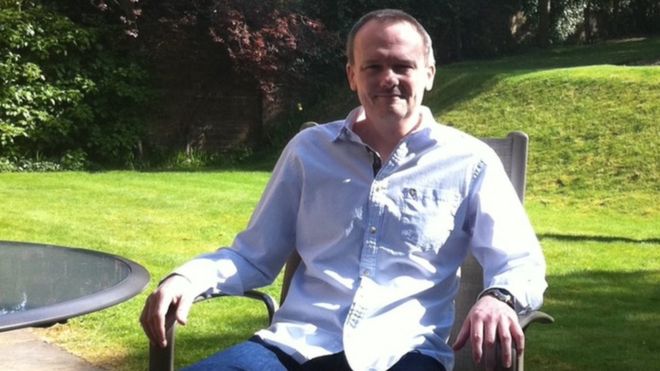 Health officials say the HPV vaccine for 12 to 13-year-old boys, starting after the summer, will prevent 29,000 cancers in UK men in the next 40 years.

The boys will be eligible from the start of the new school year, 11 years after girls were first vaccinated.

One man, Jamie Rae, says he went “to hell and back” during his treatment for throat cancer caused by the virus.

“All the things you enjoy are gone. I couldn’t speak or eat for months afterwards, and I was just skeletal by the end of it,” he says.

‘I was left with no saliva to eat’

Jamie, from Falkirk, had never heard of HPV when he found a small, disc-shaped lump growing in his neck.

After being diagnosed with oropharyngeal cancer in 2010, aged 44, he had a tonsillectomy and then six weeks of chemotherapy and six of radiotherapy.

He needed therapy to retrain his muscles so he could talk again – and he was left with very little saliva, making eating and even drinking water a real challenge.

All that took its toll, Jamie says.

“I became very depressed and it was two years before I started to feel normal again.”

At that point he set up a foundation to raise awareness of the virus that had caused him so much pain.

How do boys get the vaccine?

Boys aged 12 and 13 in England, Northern Ireland and Wales, along with boys aged 11 and 12 in high schools in Scotland, will be offered the vaccine in secondary schools from the start of the next school term.

Because health policy is devolved in the UK, timings and arrangements will vary slightly across the different nations.

Two doses are needed to be fully protected. Protection lasts for at least 10 years, although probably much longer.

Why are boys now getting the jab?

Because the programme to vaccinate teenage girls, and reduce cervical cancers, has proved very successful.

There has been a reduction in HPV infections, genital warts and pre-cancerous growths in teenage girls and young women since the vaccine was introduced.

Other groups, like teenage boys, have seen benefits too because the virus is not being passed on to them.

To protect boys even more, and reduce cancers of the anus, penis and head and neck in the future, health experts say they should be offered the HPV vaccine too.

Why is it needed at that age?

The HPV vaccine works best if boys and girls get it before they become sexually active.

High-risk HPV infections can be spread by any skin-to-skin contact, and are usually found on the fingers, hands, mouth and genitals.

This means the virus can be spread during any kind of sexual activity, including touching.

What about older boys?

Health officials say that boys are already benefitting from protection from the girls’ HPV vaccination programme and this has reduced the spread of the virus.

Girls can continue to have a catch-up jab up to the age of 25.

‘Why I paid for my son to have HPV jab’

Pat Heery, who works at the BBC, was diagnosed with cancer of the tongue, caused by HPV, in December. He experienced a very gruelling six months, having to have nine teeth removed even before treatment started.

“As a father of two boys who will both miss the free vaccinations, I was determined from the outset to give them every chance to not have to go through what I had to endure.

“Chemists and travel vaccination centres will vaccinate boys via a course of three injections costing around £500.

“As soon as my treatment was over, my 17-year-old son had his first dose of the vaccine, Gardasil.

“It is not cheap and I am lucky enough to be able to afford it.

“But the thought of having to watch my sons suffer the side effects of 30 rounds of radiotherapy means I see it as money well spent.”

What about gay men?

Men who have sex with men do not benefit in the same way from the girls’ programme, so may be left unprotected from HPV.

That is why gay men up to the age of 45 can have a free HPV vaccine if they visit a sexual health clinic or their GP in the UK.

What’s been the reaction?

Dr David Elliman, immunisation expert for the Royal College of Paediatrics and Child Health, said he welcomed the introduction of the vaccination programme for boys.

“In time, this will lead to a significant reduction in cancers of the anus, penis and head and neck,” he said.

“The latter is currently increasing in incidence, but this trend will be turned around as the vaccination programme takes effect in the future.”

Dr Mary Ramsay, of Public Health England, said the programme could “make HPV-related diseases a thing of the past”.

“I encourage all parents of eligible boys and girls to make sure they take up the offer for this potentially life-saving vaccine,” Dr Ramsay said.

“It’s important not to delay vaccination, as the vaccine may be less effective as adolescents get older.”

The Royal College of GPs said: “The potential of this vaccine to save lives and prevent the complications of cancer is huge, and since it has been available on the NHS for girls, it has had excellent take-up, with impressive results – it’s important this success is replicated with boys.”