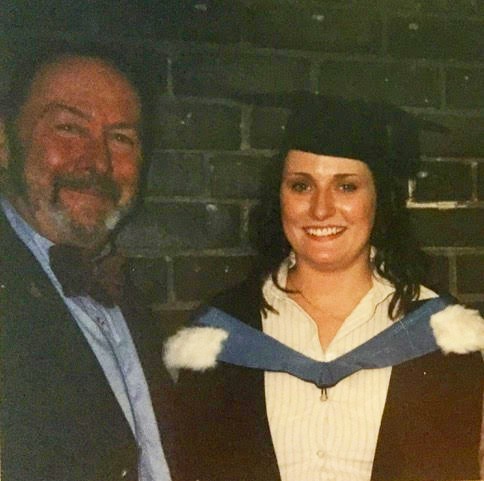 Throat cancer can change many lives in an instant, quickly altering family and relationship dynamics.

Caring for someone with throat cancer can often be a frustrating and isolating experience, particularly if the carer doesn’t have a good support network.

Dr Elaine Emmerson, who is leading a groundbreaking treatment for those who suffer from permanent dry mouth as a result of throat cancer, has opened up about her experience of caring for her father when he suffered from the illness.

She is now developing a method to grow back salivary glands after radiotherapy in honour of her dad John Emmerson, who lost his battle with head and neck cancer when he was just 57.

Elaine, from the University of Edinburgh’s MRC Centre for Regenerative Medicine said: “When my father was diagnosed with head and neck cancer I was 22 and my brother was 20.

“My parents had separated four years previously and divorced two years before, and although they maintained a very good relationship, it meant that I was now my father’s next of kin.

“When I agreed to that, aged 20, I never thought it would be something I would have to face so quickly.”

During the time of her father’s diagnosis and treatment, Elaine was living in the suburbs of Leeds, about four miles from him, but working in Manchester, 45 miles away.

While he was in hospital, Elaine would visit every evening on her way home from work, meaning she was out of the house for 14 hours a day, five days a week.

Elaine said: “As part of his treatment he had his larynx (voice box) removed and so we needed to develop a new communication system.

“This was by no means easy. Once he returned home, I stayed overnight at first and then moved to visiting in the morning on the way to the train station and in the evening on the way back.

“My employers were incredibly supportive and flexible, but it was impossible for me to do everything and still work, something as a self-confessed “control freak” I found difficult.

“Instead, I co-ordinated district nurse visits and ambulance pick-ups for appointments. At the time I didn’t even question it – after all, he was my dad – but in hindsight, it was an incredibly draining time. I didn’t even consider myself a carer until years later.”

Caring for someone with cancer, particularly when it is terminal, can be a frightening experience too.

Many carers have admitted to feeling overwhelming emotions such as fear, guilt, anger, loneliness and worry.

Following her father John’s death in 2005, Elaine also found herself having to navigate the path of funeral plans, wills and estates, with support and guidance from her family and her father’s other executor, a family friend.

At 23, just a young woman herself, she sold the house that she and her brother had grown up in, and sadly, the house her father died in.

Elaine continued: “At the time I just seemed to cope with everything but in the years after his death I struggled and had to seek professional help for anxiety, something that I suffer with to this day.

“My family, friends, colleagues and employers were all outstanding and couldn’t have done more, but I wish I had known at the time that there was support out there for carers.”

Since then Dr Emmerson and her team have been working alongside national charity The Throat Cancer Foundation, set up by chief executive Jamie Rae in 2019.

Elaine has dedicated her life to leading work which could bring relief to patients living with the devastating effects of radiotherapy.

Another carer, Julie Harmon, kept a diary of her emotions while caring for her husband Phil when he was diagnosed with Tonsillar Cancer in 2014.

She admits to feeling lonely during the process, and often found herself in a heap of tears with the stress of watching her hubby fall ill before her very own eyes.

Julie said: “It’s lonely, sometimes. I used to have a Friday Facebook update as I knew people would be asking questions.

“I used to go to the bathroom and sob my heart out and come back like nothing had happened.

“My hubby, Phil, had stage 4 left tonsil cancer. He had five chemotherapy treatments, 6 weeks of mon-fri radiotherapy. So from January to June he was ill.

“We booked a mini cruise from Southampton to Zeebrugges in June as a focus. It was the best thing we did. He remained positive all the way through.”

Jamie Rae, himself a cancer survivor and the Chief Executive of the Throat Cancer Foundation, said: “Living with a throat cancer not only impacts the person fighting the illness, but also loved ones around them.

“Being a carer is a full-time job that can be challenging, testing and often overwhelming for those involved.

“The work that is carried out by the Throat Cancer Foundation aims to not only improve medical research in the field, but it is also to help carers and relatives of those living with throat cancer.”