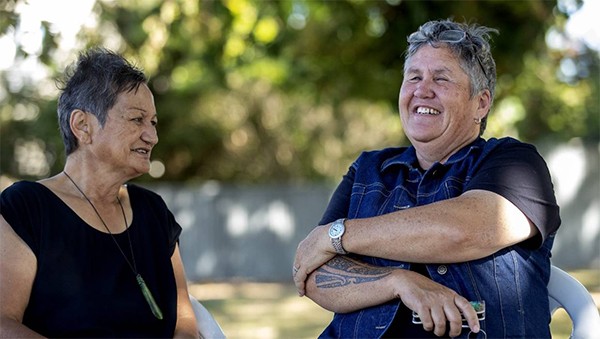 A friendly face, a good listener, and support from someone who knows the system and the culture could be the key to stemming shocking cancer mortality rates for Māori.

Massey University researcher Monica Koia says all Māori should have access to Māori cancer navigators, a service first introduced in New Zealand in the MidCentral District Health Board region.

Chrissy Paul is one of four navigators in the district, based at Te Wakahuia, one of the iwi health providers contracted by the board.

“It came about because our board wanted to reduce inequalities for Māori with cancer.”

The statistics show that despite being only 20 per cent more likely than the rest of the population to be diagnosed with cancer, Māori are twice as likely to die from it.

“The diagnosis takes you on an emotional roller coaster,” said Paul.

“We tend to be mistrusting of health systems, of most systems, because we have not done very well in them.

“People just don’t go to appointments, because they don’t ask for help.

“They are too scared to call the doctor because they don’t want to hear what they have to say.”

Paul, who often drives people to appointments or meets them there, said sometimes her assistance was a short, simple intervention.

In one case, she was asked to contact a 21-year-old man with testicular cancer who had failed to attend two appointments.

He had already explained he could only get time off work to go to Palmerston North Hospital appointments on Fridays.

Within a couple of days, he was given a Friday appointment.

Paul said there was now a regular contact person at the hospital who would manage those sort of booking requests.

She said there were a lot of reasons why Māori did not keep appointments, and the sorts of jobs they had, and their whānau’s dependence on their income, meant dealing with cancer was not always their top priority.

Paul has worked with another Feilding patient, Prim Wikaire, for three years.

She has had cervical cancer, bowel cancer, and breast cancer, twice.

Paul said Wikaire was a strong and capable woman in her 60s who was a role model for others.

Two years ago her husband John was diagnosed with cancer, and his asthma was so bad that surgery was out of the question.

And so Paul has been supporting her to support her husband through a terminal illness, which claimed his life two weeks ago.

Paul said cancer had taken a terrible toll on Wikaire’s family, with several relatives dying even during the period they had been working together.

Wikaire considered Paul one of the whānau now, but Paul said part of the value of the relationship was that she was not related, and could stay strong and practical when closest family members struggled with their own grief and sadness.

“I had patients telling me how important it was that the navigators and kaiāwhina walked with them the whole way, helping them through the difficulties of the medical world.”

The trusting relationship helped make the range of health care services they dealt with less daunting.

Koia said the reasons for higher Māori death rates from cancer ranged from late diagnosis, delayed access to treatment, and transport challenges getting to services.

And from their work in prevention, promotion of screening through to end of life care and beyond, the navigators put the patient and whānau at the centre.

A Feilding woman who asked to remain anonymous said Paul had been a practical and emotional rock through her cancer treatment.

She has breast cancer, which has spread to her spine.

“There were a lot of oncology appointments when I only focused on certain things, like ‘terminal’.

“There were times I was too scared to ask certain things.”

But Paul would be her shoulder to cry on, to remind her the doctor had explained there were options, and things they could do help her live longer, and better.

She also supported her through the tragic loss of her daughter who took her own life as her mother struggled with a devastating cancer prognosis.

Koia said the health professionals who experienced having a navigator alongside their patients valued the cultural understanding they brought and the way they could speak up on behalf of the people they supported.

“It is the health system that needs to change.

“Something as simple as just having a friendly receptionist can make the difference in how Māori engage.”

At the time she began her research in 2013, the MidCentral navigators were the only ones in the country.

She said the system was poorly funded, and needed to be better resourced around New Zealand if the health system was to adequately address inequalities for Māori.

The Truth About Caring for Someone with Throat Cancer – the Tears, the Frustration and the Anger
Early Promise for Radiation, Immunotherapy in H&N Cancer